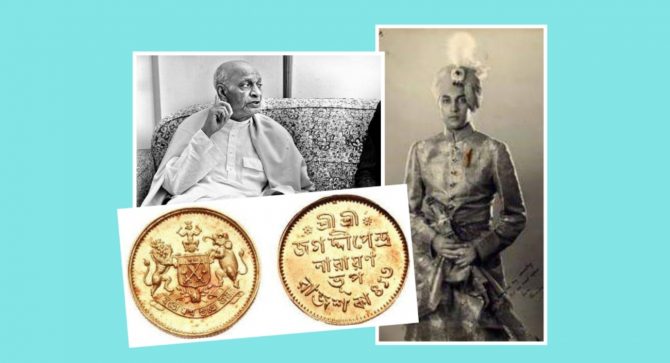 On 12th August 1947, Maharaja Jagaddipendra Narayan of Cooch Behar state wrote a letter to Iron man Sardar Vallabbhai Patel to convey his gratitude. After all India is becoming independent after 200 years of dependency under British rule.

The copy of letter is given below –

On this great and historic day of Indian independence, which you have contributed in no small measure to bring about, i send to you on my behalf and on the people of Cooch Behar, most cordial greetings.

The apprehension of most Indian States were, as you know, the natural outcome of the feeling that by shear weight of population the provinces say submerge and swamp them. The policy of fair play and sympathetic understanding which you have initiated towards the states is if i may so a very Happy angury for the future of our country. The ready response that policy has evoked from a very large of Rulers is proof of its signal success.

The country sorely needs peace and we all wish it to proper and you can count upon my whole hearted cooperation and my very best wishes in the prosecution of any policy that you may think it necessary to adopt for the restoration of peace and for the eradication of proverty.

After getting this letter, without any delay Sardar Vallabhai Patel wrote a reply letter on 17th August 1947.

The copy of that letter was such –

Many thanks for your kind letter of greetings and wishes on Independence day. I am more than satisfied with the good response which may appeal to the Rules of States to join the Dominion has met. I myself had no doubt that approached in the right way the prices would mostly respond to the country’s cause.

I should like to take this opportunity of thinking your High-ness for so readily aggreeing to accede to the Indian Dominion, Along with Assam and West Bengal.

Your State occupies a difficult position. But I have no doubt that in concert and unity we shall be able to meet all eventualities.